Difference between revisions of "Pottery Kilns"

The first kiln that we tried was a relatively crude type, using the very minimum of materials for construction, considering the adverse conditions we had quite encouraging results.

After the charcoal clamp was emptied, a small fire was lit in the pit, the pots were assembled around the top edge and turned frequently, this warming prevents later explosions when the pots are placed into the fire, also the type of clay used was such that it can withstand thermal shock.

The pots were then lowered into the fire, which was already nicely glowing, wood was piled over the burning core and pots, and over this was laid bracken and turf. These help to keep the fire in and burning slowly - it was so wet that it certainly did the job. Occasionally a turf was lifted, just to make sure that enough air was flowing through and to draw the fire slightly.

The fire was left overnight, it was a really wet night and we expected the fire to have been flooded, but the next morning it was still smoking, or was it steam? The moment of anticipation approached as various people assembled, cameras in hand, and the turves were lifted. The fire was still alight, as a burning island floating on the water filled pit. The floating fire was removed and a peasant mudlark called Osric was sent in to delve down in the nice warm water to see if there was anything left of the pots or just a soggy mass of clay in the bottom. There were many ooh's and aah's as the first pots were pulled out of the water, not too many broken. They must have reached a reasonable temperature, probably about 600℃, not high enough to change the molecular structure of the clay, but producing nicely baked, black smoky looking pots, convincing enough to be originals.

The kiln built at the Edinburgh event was bedevilled by poor weather just like the one at Brockhole. A keyhole shaped pit was dug this time on a level field. The major hole was for the 'crew' and the smaller hole was the base for the pottery kiln. Prior to arriving at the event, some saggers and pot supports had been prepared along the lines of some Gaulish finds from late Roman France. They consisted of a central hollow pillar, an array of spokes or bars and some pierced plates to act as shelves. These were put in place, and the kiln was then built up using layers of cut turf. As the 'igloo' shape began to rise together, the previously made pots were placed and stacked inverted inside the kiln.

The sides of the kiln were then added to to bring them together at the top. The walls of the kiln need to be stout enough to support themselves and the added weight of the roof, without drying out too much and crumbling. As the temperature of the kiln rises, the organic element of the turf is burnt and it doesn't take too much to persuade the mineral part to separate and cave in. To key this together, a layer of clay was smeared over the surface. The walls of the kiln can also be made in the same igloo fashion but using clods of clay. Later period kilns also used broken pots to pack out the roof, to help prevent any sudden collapses as the temperature rises. Our kiln was from ground level about two feet high externally, and about three feet in diameter.

The idea was to fire the pots for at least a day, so a small fire was started at the entrance to the kiln. The fire was kept small to prevent any sudden increases in temperature. As more wood was added, the fire could be pushed slowly inside the kiln, heating the interior gently and bellowed carefully to increase the heating effect. This slow process continued, until a sizeable fire was heating the kiln. The operators of the kiln then became the focus of a small party as the night wore on, and it ensured that there was a small team on hand to give the workers a break from proceedings. By this time, the sides of the kiln are patently hot, and a quick peep through the entrance to the kiln (for more details see the pottery article to see an artists rendition of a kiln from the period and many more Viking and Anglo-Saxon pots), would reward the viewer with a glimpse of red hot pots. 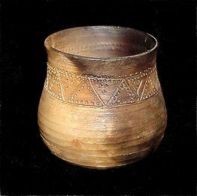 One of the pots that were fired at Edinburgh. The mottled effect on this cup comes from the binding of oxygen to the minerals in the clay making the pot pale in colour,and darker where oxygen was excluded

The firing was curtailed by a downpour late in the night when the kiln was at it's hottest, and the above ground nature of the kiln all helped to keep the water off the pots. Even the working area worked to help drain rainwater away from the kiln. This had to side effect of flooding the working area in six inches of water, which would have caused great problems had the water headed for the kiln itself. Later the next day, after the kiln had cooled down gently, the top was opened up. Despite the deluge through the night and the continuing rain in the morning and early afternoon, the kiln had fired the pots very sucessfully. As I recall, not one pot was broken, and it was evident that the kiln had reached temperatures in excess of what was needed as a minimum.

The sucess of this kiln then begged the question as to how regularly this type of kiln could be reused, assuming that a steady supply of dry pots were available. The turf had all but crumbled, and the clay had kept it together, despite some grainy material falling through. As it got darker overnight, cracks and breaks in the roof of the kiln were apparent, but no great effort was made to seal them. Turf is hard to cut with period spades and shovels, swaying us to the route of perhaps using clay clods to build the walls next time. However, none of us had done that either so we were very much speculating.

The result was a fine collection of buff pots that were mottled dark brown and black in places where oxygen starvation had occured. The overall black nature of the pots from the clamp firing is obvious when compared to the cup above. This as a one off project had gone extreemly well. It was a lesson to learn how much the weather controlled your activities re: firing. Though these problems could be gotten over.

Regia members can discuss this on the Regia Members Info group.
Retrieved from "https://wiki.regia.org/index.php?title=Pottery_Kilns&oldid=5272"
Category: