Difference between revisions of "Oven Building"

There have been a couple of oven attempts at a few long shows over the past few years. These ovens have been partly due to the efforts of Ted Jones and a few other individuals. My thanks must go to those people. Without their interest I wouldn't get to play with so much mud. Before two years ago I would never have attempted an oven without their encouragement.

The basic principle of an oven is a mound to put dough in which retains heat for cooking purposes. The 1992 Brockhole oven was built so that a fire was not actually lit in the oven at the time of baking. This eased the problem which we had during the Brockhole 1991 show where we kept burning the bread. More details about cooking methods at the end.

All of the ovens from our period which have been excavated have been in houses, not built in the open. Usually these were separate 'bakehouses' where all the various stages of baking went on from grinding the grain to the baking. The 'Ofn' was one of the "many things a farmstead must have." However, if they wanted bread in a tented encampment they must have sometimes built them outside. According to surviving literary evidence the ovens could be big enough for a man to fit inside, as some ovens discovered by archaeologists have been. At West Stow half a sunken floored building was occupied by the remains of a large clay oven 3'6" long. Its floor was of clay, 2 ½" thick, with a layer of flints, with 6" thick walls at it's base. North Elmham yielded an oven of similar size. At Porchester in building S11, probably the bakehouse serving the hall, there was an oven built largely of re-used Roman tiles and some lumps of limestone set in clay. The walls were about 15" thick and the floor had been considerably worn with use. It had been built over the remains of an earlier oven 3' x 5' in area and 9" deep, the floor of which showed considerable signs of intense heat.

Ovens were probably a fire risk. It was probably this risk, as well as the convenience of having all the baking processes together in a single purpose building, that caused them to be housed separately. However, in Hedeby a house was found with an oven as well as living quarters.

The oven's most important function was to cook bread, but they could also have been used for roasting joints of meat, perhaps coated in a flour and water paste which sealed in the juices. After the bread was baked, ovens could have been utilised for a range of dishes that needed long, slow cooking.

How To Build an Oven

Although there are several methods of building ovens, this article will concentrate on one, the sort we built at Brockhole.

How to Use the Oven

Other techniques of oven building all use the same principle, although materials may vary. The oven may be constructed from turf, clay over a wicker frame or dug from a mound. 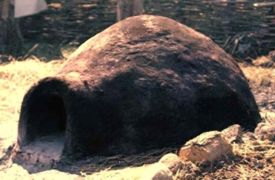 The oven in the image to the right is built in the more usual style of clay over a wicker frame. This was built in Denmark at the Lejre Folk Historic park near Roskilde in 1994. The structure is the same as the glass kiln built at the same site. All the clay was dug out of a bank by hand from nearby and rendered to rid the clay of any small stones. The frame of the structure was made on a thick clay 'stead', by marking out, and then pushing sharp hazel rods into the ground. Over these rods, a large sausage mix of clay and hay was bound together over the rods to create a thick base to the wall. The intention was to weave a basket like structure over which more clay and hay would be added. However, it soon became clear that as the wall rose, more hazel stakes could be rammed into the clay walls in between previous rods. This is how we continued to create the finished form you can see above. It was fired both inside and out (not the kind of thing you can do inside a building). The base walls were about 6 inches thick, thinning in the roof to about 3 inches. It's external plan was roughly 5 feet long and 4 feet across, rising to 3 feet in the roof. The final fired shape was strong enough for a man to stand on, and for a thin man to get his shoulders through the door and get most of his trunk inside the oven itself. Whilst there, we used it on three separate occasions to cook bread and some meat. Prior to each baking session, we threw some grains into the oven when the fire was raked out, to determine whether the oven was hot enough. If it is, the grain of wheat will burst open with the heat. The door was made from a thick off cut of timber, trimmed to fit the entrance. This was considered to be sacrificial, and not made very elaborately. During the cooking, the door was sometimes plugged with clay if there were too many gaps as it 'died'.

For the winter months, the oven was covered with a thick layer of turves to protect it from water penetration and subsequent frost that would have started its destruction. The oven was still intact in 1999.