Difference between revisions of "Mid - Warriors" 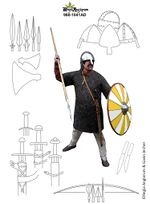 This is a period of rapid military advancement driven by frequent Scandinavian raids. Weapons and armour are markedly more plain and utilitarian than in previous centuries and the new industrialised towns churn out evermore weapons, helmets and mail shirts.

The conical iron helmet is worn by all but the poorest of warriors. The large round wooden shield is the primary form of defence. During this 60 year period, mail shirts slowly become more numerous, going from being restricted to the wealthy in the 970s to being worn by most professional warriors by the 1040s.

Warriors carry into battle 1 or 2 javelins to throw and a spear to use one-handed and overarm in combat. Additional weapons could include a seax, a large single edged knife; a simple hand axe; or a sword. Swords are both plainer and more plentiful than before and many warriors now carry them. The seax was carried by the English, both as a status symbol and as a weapon of last resort.

Sometime around AD1016 the new terror weapon, the Dane Axe arrives in Britain. A large axe wielded in both hands and deployed to stop mounted warriors. The English are experimenting with fighting from horseback, as is the norm in mainland Europe, but with limited success.

Most arrows are now bodkins, designed to pierce the ever increasing number of mail-shirts. Although bows do not constitute a major part of the battle they are used both in the starting clashes and also in seiges by both attackers and defenders alike.

Regia members can discuss this on the Regia Members Info group.
Retrieved from "https://wiki.regia.org/index.php?title=Mid_-_Warriors&oldid=4507"
Category: