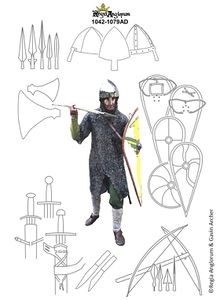 This period sees the adoption of European military styles of combat especially after the Norman Conquest of 1066. Weapons and armour are generally plain and utilitarian being mass produced in the industrialised towns.

The conical iron helmet is worn by all warriors. The European kite shield rapidly becomes the dominant shield shape, although the traditional round shield continues to be used by some. Mail shirts are worn by most warriors. Generally they come to the elbow and to mid-thigh. The rich however now wear the haulberk style, a long mail shirt coming to the knees, split front and back and with an integral coif.

Warriors carry into battle 1 or 2 javelins to throw and a spear to use one-handed and overarm in combat. Additional weapons could include a seax, a large single edged knife; a simple hand axe; or a sword. Swords are generally plain and carried by most warriors. The seax was carried by the English both as a status symbol and as a weapon of last resort. Dane Axes are carried by some, a large axe wielded in both hands and deployed to stop mounted warriors.

Before the Battle of Hastings in AD1066 the English still mainly fight on foot and only use archery in siege warfare. After the Norman Conquest both archery and mounted combat become common. Most arrows are bodkins, designed to pierce mail-shirts.

Regia members can discuss this on the Regia Members Info group.
Retrieved from "https://wiki.regia.org/index.php?title=Late_-_Warriors&oldid=4580"
Last edited on 23 January 2018, at 15:23