The AO Team are currently unaware of any evidence for throwing axes being used during Regia's period of interest. An earlier type of axe called a 'Francisca' was specifically designed for throwing. It dates to the period AD 400-550 and it is assumed that this form evolved into the 'bearded' axe of the Viking Age.[1]
There is some suggestion that small axes such as the Mammen Axe, from Mammen in Denmark, may have possibly been thrown as as such is is considered Allowable to demonstrate axes being thrown at events. 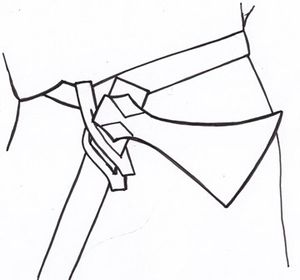 A strip of waste leather or cloth with a slit cut down its center and tucked through the belt. The axe is dropped through the two slit holes. Ideally the leather or cloth should be thin enough to snap if a firm tug is made upon the axe handle.
A number of slit leather strips have been found in York, London and Hedeby. Although the exact use of these strips is impossible to deduce and a number of suggestions have been made[2].
We never see axes suspended from the waist in manuscripts. Even so it is felt that some mechanism for wearing an axe at the waist must of existed as just simply tucking the axe through the belt would have been hindering to movement and not secure.