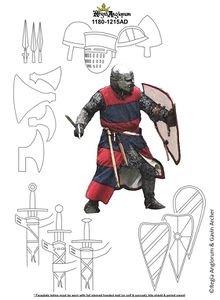 Weapons and armour are generally plain and utilitarian being mass produced. The third crusade at the end of the 12th century sees the introduction of the fully armoured knight.

In general warriors continued to use the same military equipment as they had in the years before, except that the kite shield is now used by all.

Knights on the other hand have access to the latest military equipment. Full mail shirts designed to cover the entire body including mailed mittens and foot covers. They wear full-faced helms and carry either a kite or heater shaped shield. Some are starting to wear simple plain surcoats over their armour.

There are a number of new types of weapons, including large axes and maces.

Mounted cavalry is the norm for knights and professional warriors. Archery is used in combat both by long bows and crossbows. Most arrows are bodkins, designed to pierce mail-shirts.

Regia members can discuss this on the Regia Members Info group.
Retrieved from "https://wiki.regia.org/index.php?title=Angevin_-_Warriors&oldid=4582"
Last edited on 23 January 2018, at 15:25