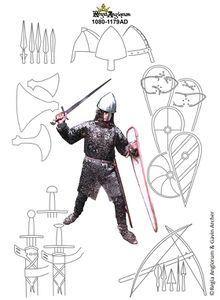 Weapons and armour are generally plain and utilitarian being mass produced. The first crusade at the end of the 11th century leads to a number of military improvements.

The conical iron helmet is worn by all warriors. The kite shield is the dominant shield shape although the traditional round shield continue to be used by some. Mail shirts are worn by most warriors. Generally they come down to the knees, and are split front and back. The sleeves end either at the elbow or at the wrist. Mail shirts also have an integral hood and some warriors in addition wear mail leg protection.

Warriors carry into battle 1 or 2 javelins to throw and a spear to use one-handed and overarm in combat. Additionally a sword is generally carried by most warriors. Dane Axes are carried by some, a large axe wielded in both hands and deployed to stop mounted warriors.

Mounted cavalry is the norm for professional warriors. Archery is used in combat both by long bows and crossbows. Most arrows are bodkins, designed to pierce mail-shirts.

Regia members can discuss this on the Regia Members Info group.
Retrieved from "https://wiki.regia.org/index.php?title=Very_Late_-_Warriors&oldid=4581"
Category: