Monasteries were places where men could go and devote their entire life to God. Most of their waking hours were governed by a set of rules, laid down by St Benedict in the sixth century. Since the latin for a rule is 'regula', they are usually known as 'regular clergy'. In contrast, the priests were called 'secular clergy', from the latin 'saecularis', meaning 'of the world' - in other words, they were not shut up in a monastery all the time.

Monastic life was not easy. The Rule of Saint Benedict really does account for every hour of a monk's life, with prayer and work. The work the monks initially had to do was first in the field, or building the monastery, but later the monks began the important task of copying and translating manuscripts. Their life was supposed to be spent entirely inside the monastery, with little contact with the outside world, as the following extract from the Rule shows:

'When brethren return from a journey, they should lie prostrate on the floor of the oratory and ask for the prayers of all for any faults that may have overtaken them on their journey, such as the sight or hearing of an evil thing or idle chatter.'

Clearly the outside world was seen as a very bad influence. However, some contact was inevitable, if only to sell the monastery's produce at market. Ælfric wrote a Colloquy to help with learning latin at the end of the tenth century, which includes a reference to monks being traders or merchants (ciepemenn), so perhaps practical necessity over-rode the Rule from time to time. 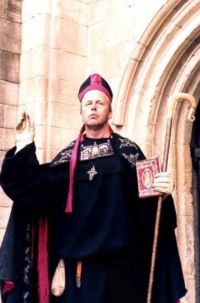 Large monasteries were known as abbeys, whilst smaller ones were called priories and were often set up near an abbey. Abbeys were dotted throughout the country, and there was always one attached to, or associated with, the cathedral. The monk in charge of an abbey was the abbot, elected for life by the bretheren. His deputy was the prior (which was also the title of the monk in charge of a priory).

Within the abbey, some monks had particular jobs to do and specific titles, such as the cellarer. On the whole though, it would seem that monastic life was not for the ambitious. However, of the 116 bishops appointed to English sees between 960 and 1066, no fewer than sixty-seven were monks.

In addition to abbeys for men, there were also those for women, the most famous being Nunnaminster at Winchester, founded by King Alfred's widow Ealhswith. These were run along exactly the same lines as the houses for men.

A monk was given a ground length tunic of undyed wool upon becoming a novice. This was belted, and a drawstring pouch was suspended from this containing, perhaps, his rosary and few meagre belongings. Over the tunic he wore a scapula, a long tunic with wide, three-quarter length sleeves, usually of a darker undyed wool. The scapula was meant to protect the chemise, and had a built in hood or cowl. The scapula was often cinched in at the waist by a (rope) girdle. Anglo-Saxon translations of the Benedictine Rule demonstrate that monks were expected to have socks and hose, and other literary evidence suggests that monks often wore leg-bindings. The only other things the monk might have were a pendant cross and a pair of shoes or sandals, although some went barefoot as a lifelong penance. The monk's hair was tonsured and probably cropped to control lice. Abbots received a ring and staff of office, the same as a bishop's.

Nun's garb is rarely shown in illustrations, but when it is it seems to have been broadly similar to the simpler forms of everyday woman's costume, but usually included a 'holy veil' , often with a fillet, and of course would have been of sombre colours. The term rift is often used of nun's clothing, and came to stand for the religious life, much as we may speak of a woman 'taking the veil' today.