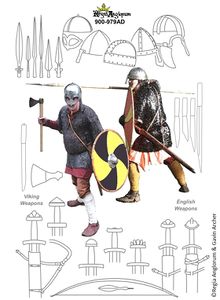 Following Alfred’s reforms, the warriors of the 10th century are increasingly better equipped. Many warriors wear either the old fashioned iron domed helmet or the new style iron conical helm. A large wooden round shield is the primary form of defence, faced in leather or cloth and with an iron boss covering the centre grip. Mail shirts are usually only available to rich aristocrats and professional warriors, although they are becoming ever more common as the century progresses

Warriors carry into battle 1 or 2 javelins to throw and a spear to use one-handed and overarm in combat. Additional weapons could include a seax, a large single edged knife; a hand axe, with or without a beard; a langseax, a 45-60cm long single edged knife; or if they are very lucky, a sword. Swords are incredibly expensive and normally only carried by the rich aristocratic warrior class. The seax was carried by the English, both as a status symbol and as a weapon of last resort.

With the increased number of mail-shirts comes the bodkin arrow head. These are specifically designed to pierce armour and become common after AD950. Warriors fight on foot and as one unit. Combat starts with exchanges of arrows, javelins and clubs. There are no specific units of 'Archers'. The two shield walls would then advance and engage with spear and sword. Many spears carry pennons and each lord would have with him a banner-man to carry his personal standard.

Regia members can discuss this on the Regia Members Info group.
Retrieved from "https://wiki.regia.org/index.php?title=Early_-_Warriors&oldid=4518"
Category: